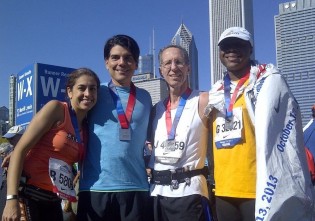 In October 2013, I ran the Bank Of America Chicago Marathon. It was my fifth full marathon (26.2 miles) and my second Chicago.

I was pleased, disappointed, and brought to a place of reflection. Pleased that I beat my previous best marathon time by four and a half minutes and my previous Chicago by eleven minutes. Disappointed because I thought I was going to do a little better. And brought to reflection for several reasons.

A marathon, like any major accomplishment in life, is not just a single event. In reality it takes place in many more times and venues than just race day and a particular city.

For this marathon, I was on a specific training plan for 20 weeks. Every workout was part of the whole. And just about all of them, though sometimes grueling, were enjoyable in some way. Certainly there were days when I didn’t want to get up at 4:30am to run or crosstrain, but the sense of achievement when the day’s goal was met was worth every minute.

I also interacted with some great friends along the way. We were all preparing for the Chicago race together back in our home town of Ft. Lauderdale and surrounding communities. We swapped e-mails, text messages, phone calls. We shouted encouragements to one another as we passed on the roads and at the track.  Our relationships deepened, because there are few dynamics that bring people closer than mutual suffering.  And then we rejoiced together at the finish line as the photo accompanying this article shows.  (That’s me in the white shirt.)

Then there was the Chicago experience itself. Several days enjoying the city with Linda, my wife. The excitement of being with 45,000 runners. The cheers of an estimated two million spectators. And crossing that finish line, knowing that I’d met a milestone in life that I thought would be impossible just a few years before, was deeply rewarding.

The Chicago Marathon was tremendous. But it’s only a metaphor for so many facets of your life and mine. Each day there are triumphs and there are disappointments. Yet if we look at the bigger picture – if we reflect on everything that brought us to that day, the people we’ve touched and who have helped, and the overall events themselves, we find that profound things are taking place within us and those around us. We’ve all tapped more of our own potential. And that’s a race that everybody wins.